THE EASY WAY TO GET LARGE KERNELS FROM BLACK WALNUTS

Years ago when I was a boy, I used to crack Black Walnuts for my mother. She used these for making pies and brownies. I especially remember the pies which were similar to Pecan Pies except the Black Walnuts were used in place of the pecans. These were delicious – I remember Mom using the recipe that was on the back of a Karo Syrup bottle. I believe the recipe is still on their Syrup bottles today. A link to this recipe is https://www.karosyrup.com/recipe/homemade-pecan-pie/ 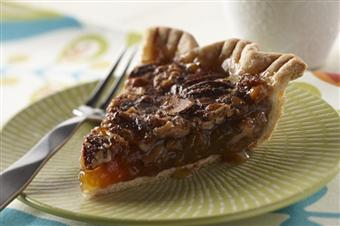 The larger the kernels of nutmeat, the more attractive Mom’s pies were. I would always strive to crack the walnuts in order to yield the largest kernels possible. Also, I had to compete with a pet bantam chicken (I called her Banty) who was constantly in my way and was quick to peck up any small kernel-pieces that went flying when I was cracking the nuts.

I would spend at least 1 hour of hard work to crack out one cup of kernels. I had a large rock between the house and barn I could sit on and also use to crack the Black Walnuts. Black Walnuts have a thick and tough shell and do not give up the kernels easily. In order to get the best results, the nuts would be held carefully, with one of the pointed ends up, with one hand and you had to hit it rather hard with a hammer with the other hand. The combination of the rather rounded shape, balanced on end, held with thumb and finger, along with the slick hammer-head surface gave rise to frequent mishits and mashed fingers. If you tried to crack the nut by hitting it on its side, the kernels or nutmeat mostly end up smashed into mush. The absolute best you could do with a hammer was 5 pieces of kernels from one nut and this was rare – usually, 6 to 10 kernel-pieces per nut was the yield.

After, an engineering career in the OEM Automotive industry, I retired and moved back home to Northern Arkansas where I have a shop and time to “fiddle” with different projects of my choosing. One of the projects I decided to work on was an easier way to get large kernels from Black Walnuts. After 4 developmental prototypes, I believe I have now a good way for anyone to be able to get large kernels from black walnuts with ease. I have named this the WALNUT SAW™. I invite you to learn more about how it works or purchase it now.